In Romania, on July 29, a referendum for the impeachment of Traian Bsescu will he held. The referendum follows the President’s suspension by the Romanian Parliament on July 6. The impeachment procedure was validated by the Constitutional Court, which argued that there are two instances in which the suspended President clearly broke the constitutional provisions.

During the last couple of weeks, an intense electoral campaign has been under way in regards to this very important vote. As a result of tremendous political pressure, a quorum was imposed for the validation of the referendum, namely that on July 29 50% plus one of the registered citizens take part in the electoral process. This turnout threshold was never effective in the referenda held during the last decade. It was nevertheless introduced at Traian Basescu’s and the PDL’s pressure, as well as a result of important demands stemming from within the European Union.

It is important to notice that the reasons for the imposition of this threshold seem to differ for the EU, on the one hand, and for the President’s camp, on the other. Whereas the EU asks for this threshold in order to get a legitimate popular answer to this serious political crises and to ensure that the vote against or in favour of the President’s impeachment meets a democratic quorum, Traian Basescu’s camp insists on it in order to have the referendum invalidated.  It is becoming clearer that this is the strategy of the suspended president, who actually stated that “the validation of the referendum will be a disaster” and that a solution to this problem is the citizens’ abstention from voting. 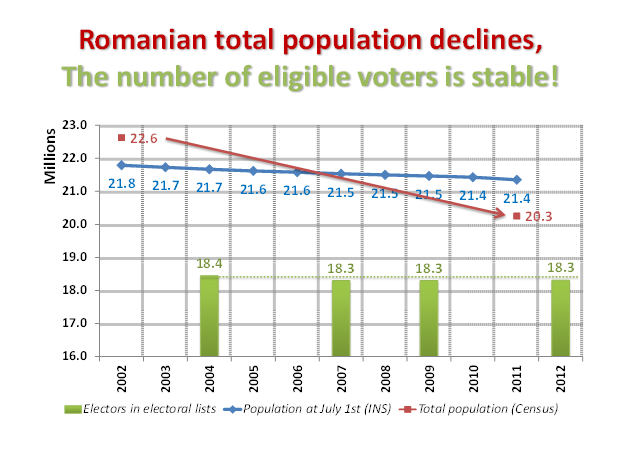 Additional information for the analysis – the electoral lists on the basis of which the threshold is determined haven’t undergone any changes since 2001, registering a population of approx. 18 million voters. The last census nevertheless has determined that Romania’s population has decreased by roughly 3 million people. The census data have not had an impact on the electoral register due to the previous governments’ inaction.

This analysis will present all data made public as a result of sociological research. They determine both the voter’s opinion in regards to the impeachment of the President, as well as the estimated turnout.

Results from opinion polls
The table below shortly presents the results of all public opinion polls made during the electoral campaign for the impeachment referendum. 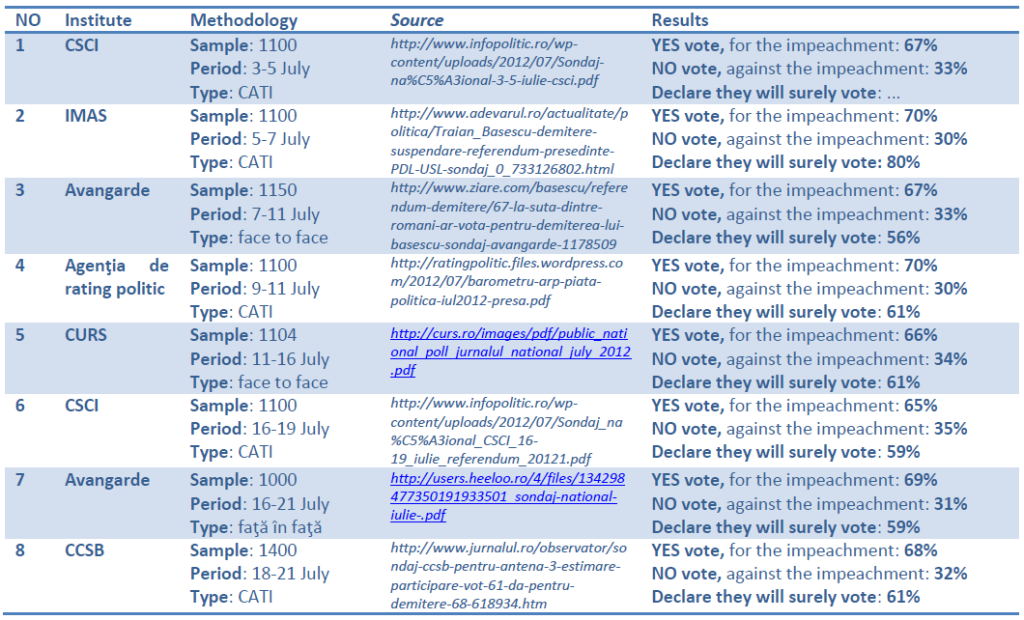 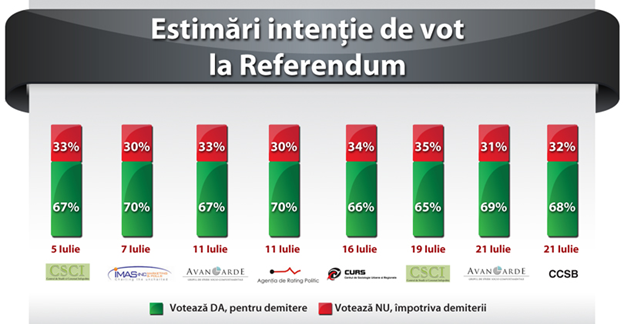 During the last week, several estimates of the turnout have been made public. Therefore, in addition to the questions regarding the turnout (the answers to which vary between 56 and 61% absolute participation to the vote) several differences between the basis of computation (the stable population of citizens allowed to vote) and the electoral list (which comprises the persons living abroad for more than a year) have been taken into account.

Hence, estimates that predict a 51% up to 55% turnout have been made public, as a result of the consistent responses of the interviewed people who declared they will resolutely vote in the referendum and indicated a clear voting option.